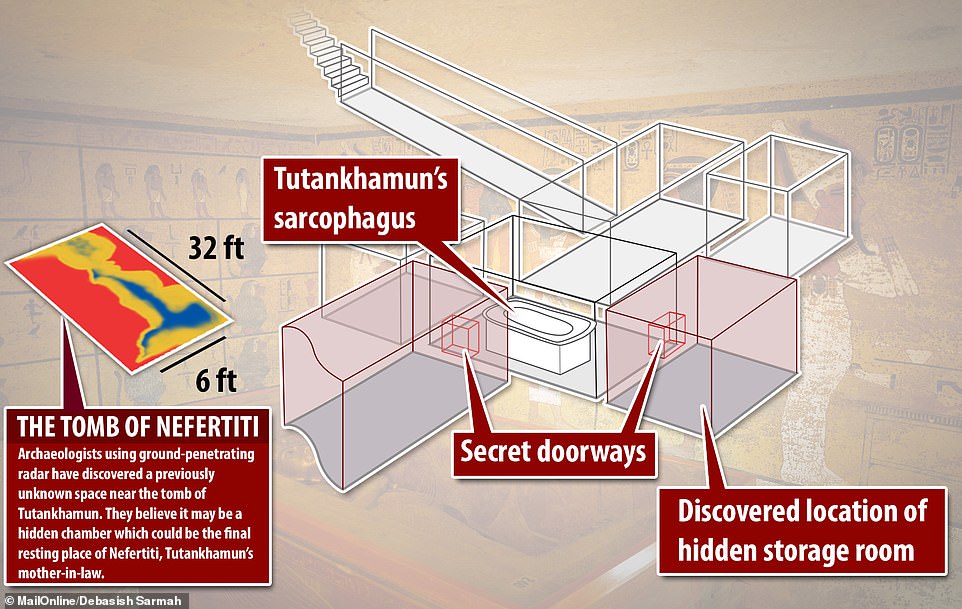 A series of hidden chambers at the 3,400-year-old tomb of Tutankhamun in Egypt’s Valley of the Kings could be the final resting place of ‘mysterious’ Queen Nefertiti.

The famed female pharaoh ruled Egypt from 1353 to 1336 BC and was either mother or step-mother to King Tut – Egyptology believed she was laid to rest in the Valley of the Kings but her tomb has never been found.

The large room was found within the bedrock a few feet to the east and at the same depth as Tutankhamun’s chamber. and some Egyptologists believe it could be the missing tomb of Nefertiti.

Scroll down for video

Researchers used ground penetrating radar to reveal a previously unknown space near the tomb of Tutankhamun that may have been the resting place of Queen Nefertiti. Radar surveys found corridors a few feet from Tutankhamun’s burial chamber that seem to lead to a larger 32ft wide room with 6ft high ceilings 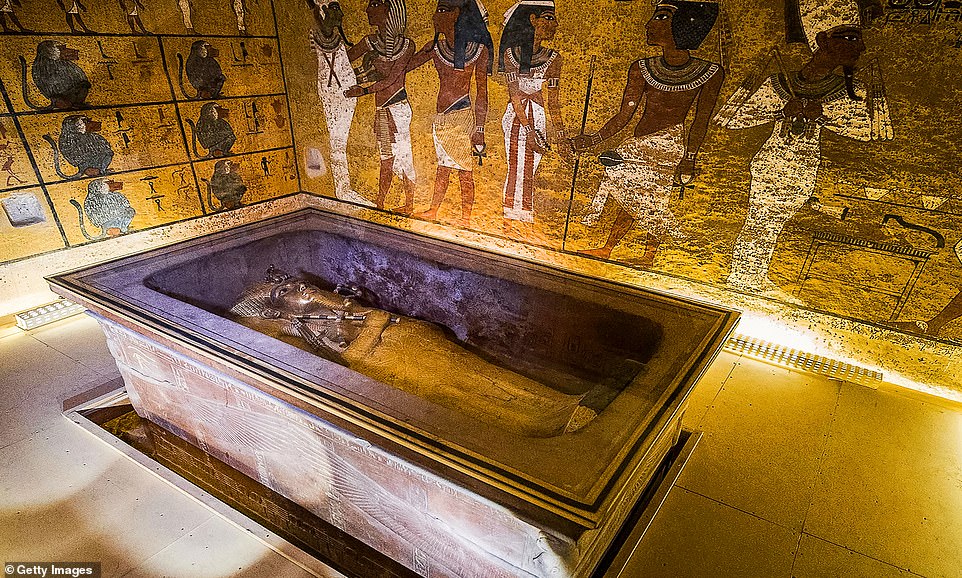 The Tomb of Tutankhamun, Luxor, Egypt was first discovered in 1922 and there has been speculation since that it may also house a secret larger tomb where Nefertiti is buried 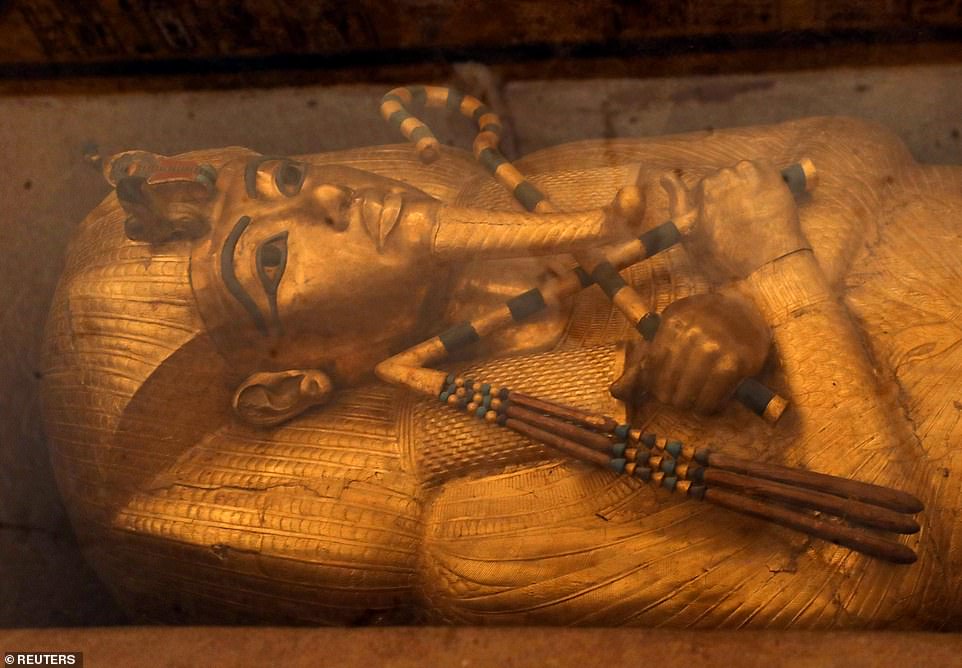 Pictured: The sarcophagus of boy pharaoh King Tutankhamun. His throne was looked after for him by Nefertiti, who is thought to have been the mother, stepmother or mother-in-law of the king

The unpublished paper, reported on by Nature, resurrects a long held theory that claims within the tomb of King Tut is a larger tomb where the mysterious Queen Nefertiti is buried.

Some Egyptologists claim that before Tutankhamun’s reign in the 14th century BC Nefertiti ruled as pharaoh but her tomb has never been found.

Experts believe due to her huge influence and cultural importance in ancient Egyptian history, she should have a tomb at the famed Valley of the Kings.

Eldamaty and his team believe this chamber they have found off the tomb of King Tut may have be Nefertiti’s final resting place.

Researchers don’t know whether the new space is physically connected to Tut’s tomb, but say the fact it is perpendicular to the main space suggests it is joined.

The team were studying a theory that Tutankhamun’s tomb is unusually small for a royal burial site and so must contain hidden burial chambers. 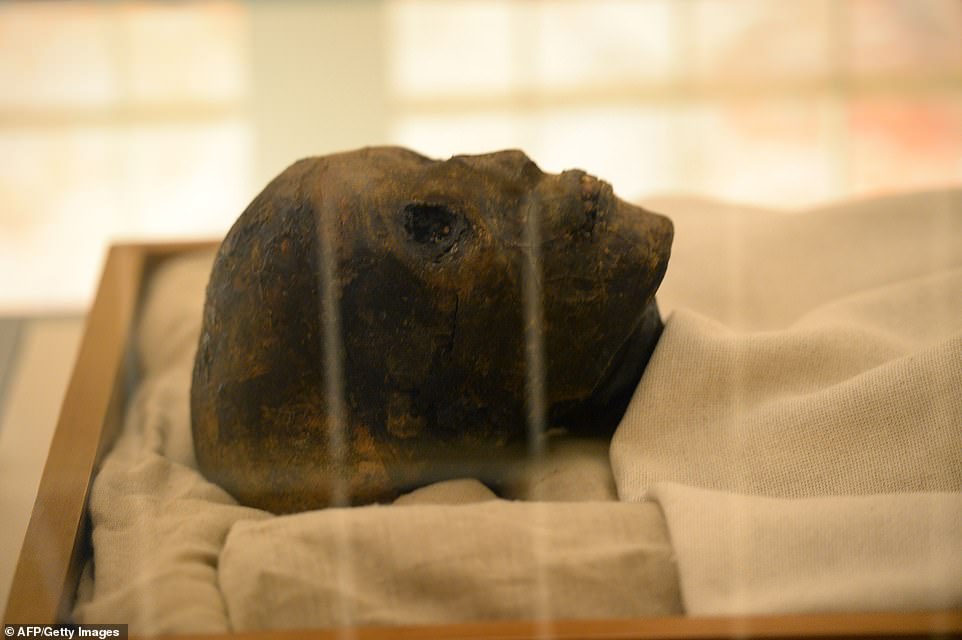 Pictured, the face of King Tut today. Since it was discovered 98 years ago, his tomb has captivated attention but despite being an enormous historical figure in ancient Egypt herself, the burial chamber of Nefertiti has never been found 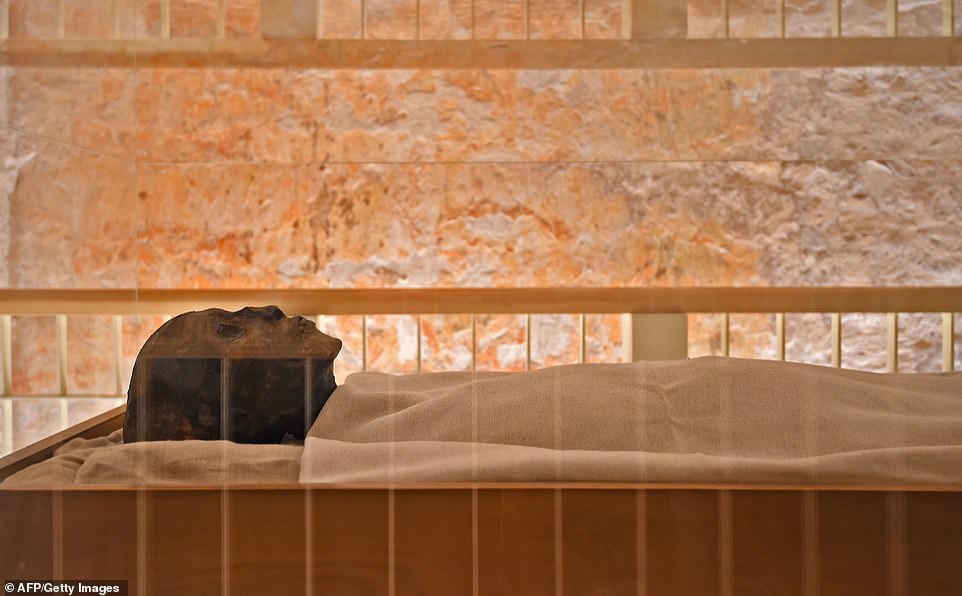 This photo reveals the mummified face of the famous Egyptian Pharaoh Tutankhamun, who died at the age of 18. A large room has been found in the bedrock a few feet to the east of his tomb at the same  depth as his chamber. This may belong to Nefertiti, experts claim

WHO WAS QUEEN NEFERTITI? 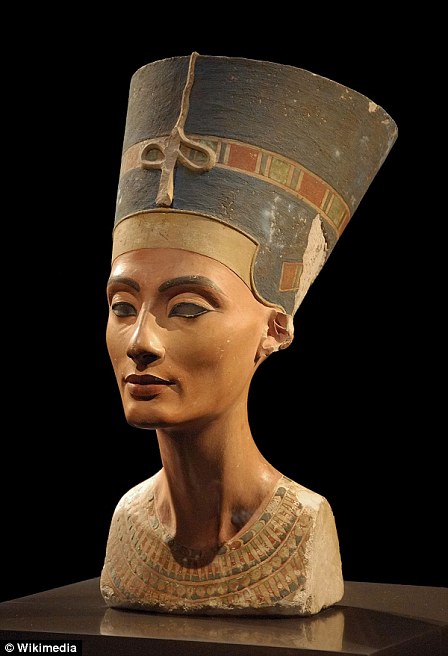 Queen Nefertit was one of ancient Egypt’s most influential Queens, ruling during the empire’s prosperous 18th Dynasty.

Nefertiti, who ruled Egypt 3,300 years ago from 1353 to 1336 BC, was either the mother or stepmother of the boy-pharaoh King Tutankhamun.

Her full name, Neferneferuaten Nefertiti, means ‘Beautiful are the Beauties of Aten, the Beautiful One has come’.

Her power and charms in 14th-century BC Egypt were so great that she collected many nicknames, too – from Lady Of All Women, to Great Of Praises, to Sweet Of Love.

Nefertiti lived during the richest period in ancient Egypt’s history – from around 1370BC to 1330BC.

As well as marrying a king – Pharaoh Akhenaten – she was probably born the daughter of another pharaoh, and possibly ruled alongside Tutankhamun.

Nefertiti and Akhenaten had six daughters, although it is thought that Tutankhamun was not her son.

DNA analysis has indicated that Akhenaten fathered Tutankhamun with one of his own sisters – making Nefertiti his step mother.

Her beauty and power were depicted in a number of temple images.

Sometimes she is shown walking behind her husband, but is also often shown on her own, in positions of pharaoh-like power.

Her own death is shrouded in mystery. She is thought to have died about six years after her husband, possibly from the plague that struck Egypt at that time.

In 1331BC, Tutankhaten changed his name to Tutankhamun and moved the Egyptian capital to Thebes, where he died in 1323BC.

Tut’s tomb was discovered in 1922 by English archaeologist Howard Carter. Theories around the tomb and links to the enigmatic Nefertiti have swirled in the intervening 98 years.

Ray Johnson, an Egyptologist at the University of Chicago’s Oriental Institute in Luxor, Egypt, who wasn’t involved in the research, said the radar images are an exciting development.

‘Clearly there is something on the other side of the north wall of the burial chamber,’ he told Nature.

The idea has been investigated by researchers before – including with radar.

In 2017 Francesco Porcelli from the Polytechnic University of Turin, Italy carried out a GPR survey inside the tomb and ruled out any hidden rooms.

He excavated the area north of Tut’s tomb to look for signs of another chamber and ‘found nothing’ – he says GPR shouldn’t be used on Egyptian tombs.

British Egyptologist Nicholas Reeves spent a large part of his career working in the Valley of the Kings – he says the hidden chamber isn’t where he would expect.

Reeves assumed it would continue north of Tutankhamun’s tomb rather than turn to the right as the findings suggest – but still believes Nefertiti is inside the tomb.

He told Nature that if Nefertiti was buried as a pharaoh it could be the biggest archaeological discovery of all time. 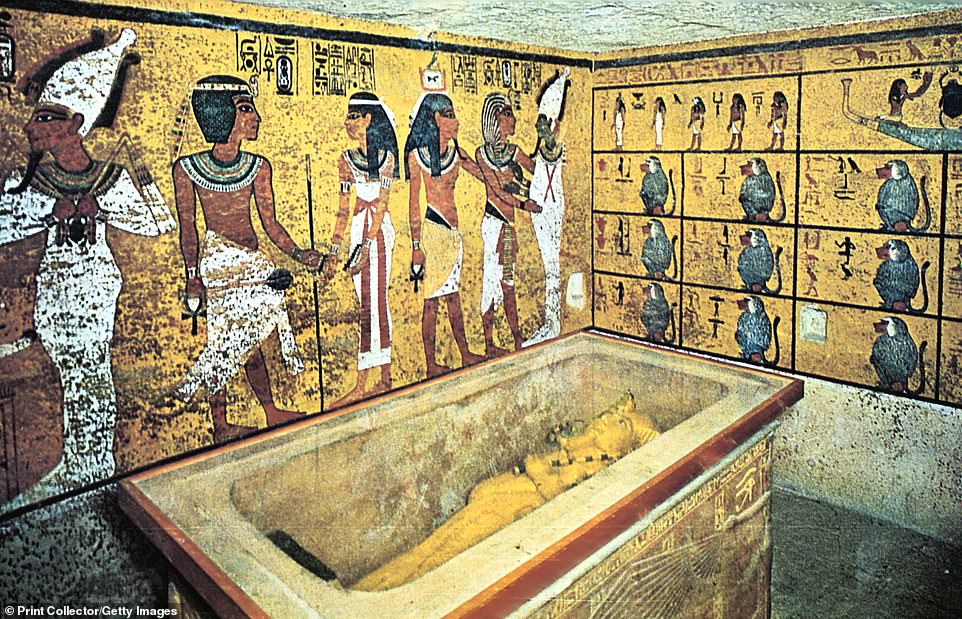 Sarcophagus containing the gold coffin of the pharaoh Tutankhamun who ruled from 1333 to 1323 were found in 1922. Researchers have been using radar surveys to uncover further secrets hidden within his ancient tomb

WHO WAS KING TUTANKHAMUN AND HOW WAS HIS TOMB DISCOVERED?

The face of Tutankhamun was an Egyptian pharaoh of the 18th dynasty, and ruled between 1332 BC and 1323 BC. Right, his famous gold funeral mask

Tutankhamun was an Egyptian pharaoh of the 18th dynasty, and ruled between 1332 BC and 1323 BC.

He was the son of Akhenaten and took to the throne at the age of nine or ten.

When he became king, he married his half-sister, Ankhesenpaaten.

He died at around the age of 18 and his cause of death is unknown.

In 1907, Lord Carnarvon George Herbert asked English archaeologist and Egyptologist Howard Carter to supervise excavations in the Valley of the Kings.

He spent several months cataloguing the antechamber before opening the burial chamber and discovering the sarcophagus in February 1923.

When the tomb was discovered in 1922 by archaeologist Howard Carter, under the patronage of Lord Carnarvon, the media frenzy that followed was unprecedented.

Carter and his team took 10 years to clear the tomb of its treasure because of the multitude of objects found within it.

For many, Tut embodies ancient Egypt’s glory because his tomb was packed with the glittering wealth of the rich 18th Dynasty from 1569 to 1315 BC.

Egypt’s antiquities chief Zahi Hawass (3rd L) supervises the removal of the lid of the sarcophagus of King Tutankhamun in his underground tomb in the famed Valley of the Kings in 2007.

Reeves says the findings are so significant that an international conference should be convened to consider the next steps.

He says this should be done before anyone starts digging or investigating further – due to the potential risk to priceless artwork and artefacts in a possible tomb.

Aidan Dodson, an Egyptologist at the University of Bristol in the UK said he wasn’t convinced Nefertiti was inside the chamber but does think there is a second tomb.

He says it may contain the remains of princesses from the reign of Tutankhamun.

Eldamaty, based at Ain Shams University in Cairo says the survey involved a team from Terravision in the UK and engineers from his university.

Interference from nearby air condition made it difficult to get data in the level of detail they wanted but hope to get closer readings in future.

Terravision carried out an earlier survey into the tomb, known as KV62 but had to cut it short after a request from the Supreme Council of Antiquities in Egypt.

They returned with Eldamaty to complete their investigation, which involved scanning outside the tomb.

He wants to return to study the feature in more detail and Terravision CEO, Charlie Williams, says he is confident he’ll be about to pin down the shape and location of the space by using a different radar antennae.

WHAT IS EGYPT’S VALLEY OF THE KINGS?

The Valley of the Kings in upper Egypt is one of the country’s main tourist attractions and is the famous burial ground of many deceased pharaohs.

It is located near the ancient city of Luxor on the banks of the river Nile in eastern Egypt – 300 miles (500km) away from the pyramids of Giza, near Cairo.

The majority of the pharaohs of the 18th to 20th dynasties, who ruled from 1550 to 1069 BC, rested in the tombs which were cut into the local rock.

The royal tombs are decorated with scenes from Egyptian mythology and give clues as to the beliefs and funerary rituals of the period. 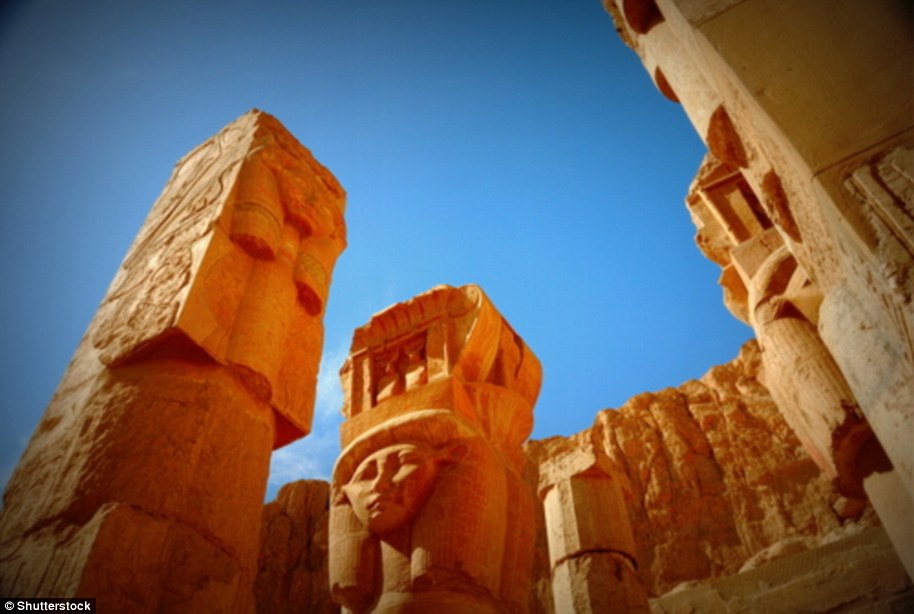 The majority of the pharaohs of the 18th to 20th dynasties, who ruled from 1550 to 1069 BC, rested in the tombs which were cut into the local rock. Pictured are statues of goddesses at the site

Almost all of the tombs were opened and looted centuries ago, but the sites still give an idea of the opulence and power of the Pharaohs.

The most famous pharaoh at the site is Tutankhamun, whose tomb was discovered in 1922.

Preserved to this day, in the tomb are original decorations of sacred imagery from, among others, the Book of Gates or the Book of Caverns.

These are among the most important funeral texts found on the walls of ancient Egyptian tombs. 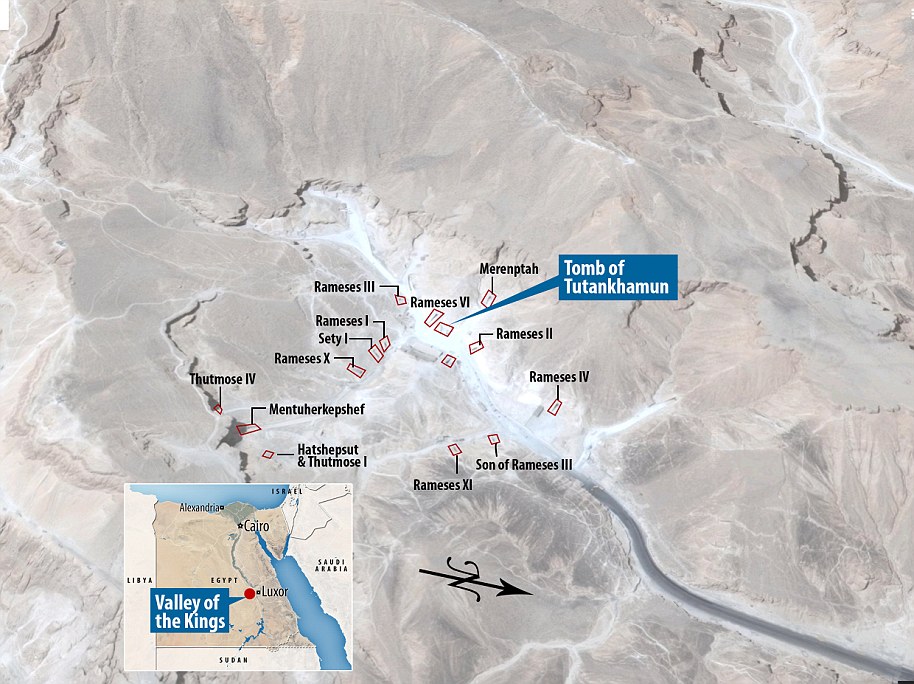 The Valley of the Kings in upper Egypt is one of the country’s main tourist attractions. The most famous pharaoh at the site is Tutankhamun, whose tomb was discovered in 1922 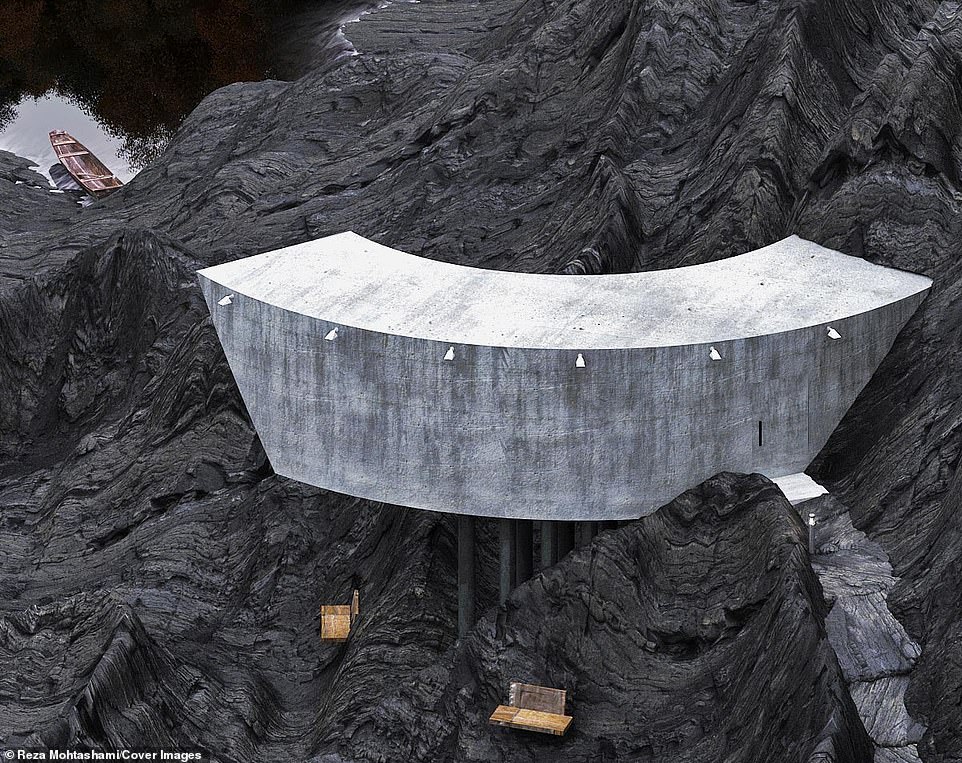 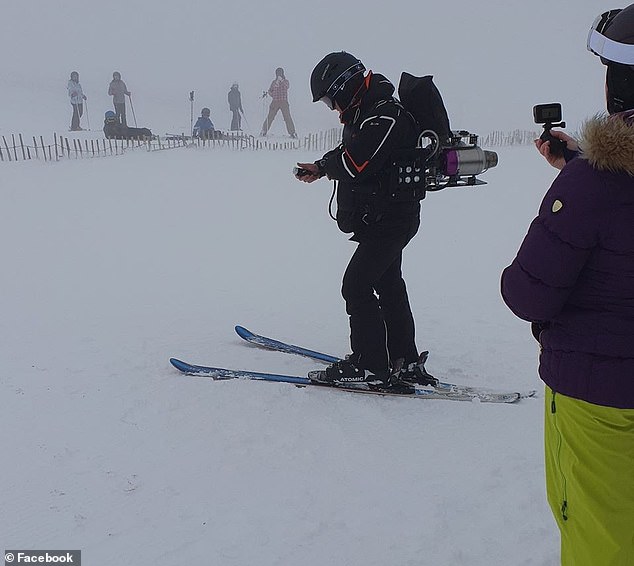 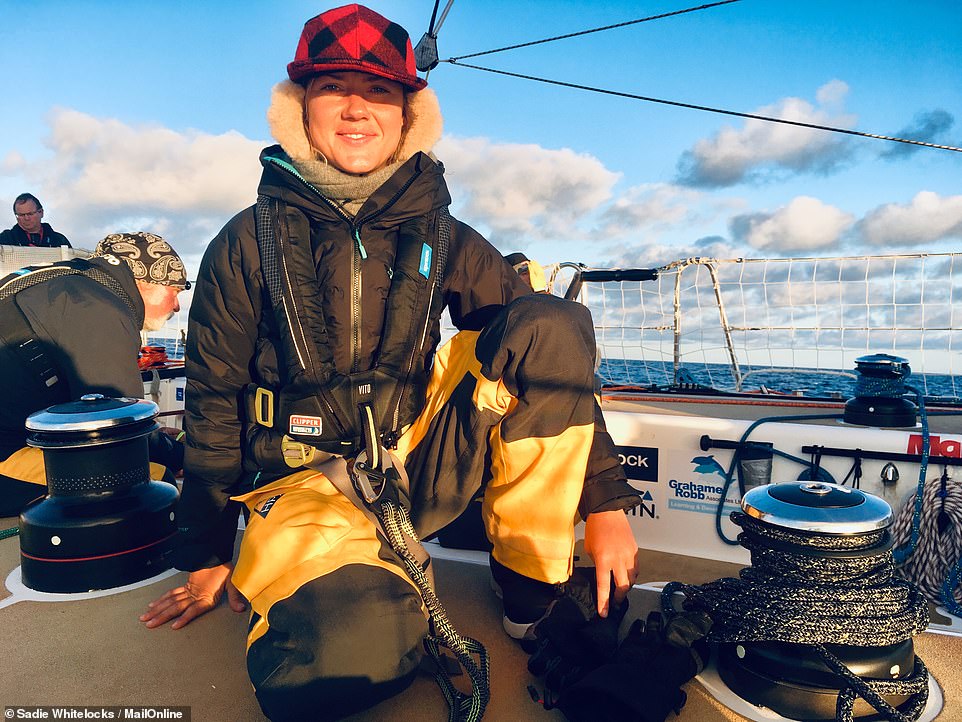